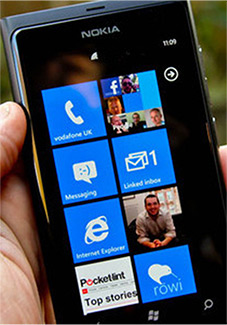 Ladies and gentlemen, thank you for coming tonight to witness this clash of the Titans. In the red corner we have Apple, the undefeated champion. In the blue corner we have Nokia and Microsoft, hungry to claim the no.1 spot. The rules are simple: no biting, kicking and let’s cut out the patent wars in court please. Ok, let’s get ready to ruuuumbllllllleeeeee.

Ok so maybe we won’t get to see an actual fight but it’s as close as it comes in the world of consumer IT. In case you haven’t turned on a TV in the past 24 hours, Nokia and Microsoft this week co-hosted a press event in New York to launch the new Nokia Lumia mobile phone range. Powered by the new Windows Phone 8 operating system the phone is both companies latest attempt at unseating Apple’s iPhone as the king of phones.

Earlier in the year (April to be precise) Nokia surrendered its position as the world’s largest phone-maker to one of our clients Samsung. Until then Nokia had held the no.1 position for 14 years (an eternity in the world of consumer IT).

So what’s special about the new phone? The new Lumia 920 has a 4.5” HD screen, set on a polycarbonate body, which increases antenna performance – so users will not suffer from dropped calls (like a certain phone). While an 8.7 megapixels camera with image stabilisation technology allows users to take SLR quality photos. According to IT Pro (one of the lucky UK news outlets to get to review the phone this week) the entire lens assembly floats on a series of tiny springs inside the device, which means that taking pictures and filming in HD is leagues above anything else in the phone market. The two firms have also struck a number of deals with businesses, such as Virgin Atlantic and some café chains, which will see the installation of wireless recharge plates allowing users to charge their phones on the move.

If you fancy learning more, viewing some videos and seeing the phone in action why not click the image to the right.

So that’s the fight done then. Apple is on the ropes, right? Think again. To counter the launch Apple this week sent email invitations with the cryptic message, “It’s almost here,” and a large number “12” casting a shadow that appeared to be the number five, suggesting that the long-anticipated iPhone 5 could almost be here. So maybe the fight isn’t over yet. Why not check back to this blog in the coming weeks where my colleague Dan will be seeing if the iPhone 5 can deliver the knockout blow to the competition or if it’s Apple that will be seeing stars.